Conceptual / experimental multi-discipline artist, writer and photographer. Creative consultant & founder of London Dada under Hugo Ball's original Dada principles.. Echoing Marcel Duchamp in respect of going beyond the purely retinal and refusing to accept the standards and practices of an established and corrupt art system, conventions that are still considered essential to attain fame and financial success: refusing to repeat himself or to develop one recognizable style to placate the commercial needs of the art market.

Entering the third decade of the new millennium, the UK is patently witnessing end-times for the few remaining vestiges of news reporting-accuracy and balance within its mainstream media. Those in the industry, charged with delivering authentic news and current affairs to the public, are having their training and hard-won skillsets inexorably undermined and compromised.
Hampered from honest reporting by corrupt print and television media-owning plutocrats, many a serious journalist lives in fear of career limitation or even termination by presenting accurately stories and events that happen to be politically or financially inconvenient to those already fiscally well-situated and in positions of power.
Acting under masks of unbiased neutrality, those few who succeed with promotion to mainstream media eminence are invariably enabled by dint of genuine or feigned allegiance to the aims and ambitions of that powerful elite; thus perpetuating an insidious system of subtle propaganda, that has in the past soft-soaped the population into accepting stringent financial impositions, restrictions and even illegal war as absolute necessities.

.
Dada; being initially a literary expression of war protest, is faithfully represented through this image – an accurate photographic metaphor of the times we live in.

Going forward, the way out from this media-manifested mayhem is plainly through each individual engaging with innate human potential for true perception, as against blindly accepting increasingly tiresome external impositions of reality.
“ Truth lies in perceiving the false As false ”
M. St.M
Shoreditch, London, 2020

After 13 years of making not insubstantial inroads of overdue change into the flint-hard fear and conformity-ridden glass ceiling of the 100% money-driven pretentious, shallow and cronyism-infested art world; what more suitable triumphant note on which to end a still largely unrecognized chapter in art history than the closure of Dada’s formerly missing UK expression co-inciding with being blocked by the almighty Artnet on social media, simply for having the audacity to publicise home truths about international art market big name cash cow con artists such as Koons and Hirst.

Link to the story typifying Jeff Koon’s ( and others ) MO, just the latest in a long line of habitual plagiarism of other artists’ work, combined with a depressing personal paucity of creative originality, skill, talent or moral compass in at least tipping a name hat to the unrecognized artists behind much of their output.

Addendum.
Work to continue on this blog and London Dada websites in refining, upgrading and adding missing content from some earlier posts, whose loss was due to LD’s former blog platform blog.co.uk closing in 2014.
Artist ART AXIS to remain active in promoting existing LD content across social media for posterity and continue to conduct Banksy-style public awareness stunts London-wide through our Green Disc subsidiary co.

The 7 Tenets of Dada

6191 photography collective
Carrying the torch for Hugo Ball’s vision through the medium of photography reoriented;
“ Art that expresses true perception and fearless criticism of the times we live in ” 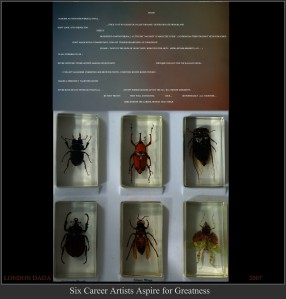 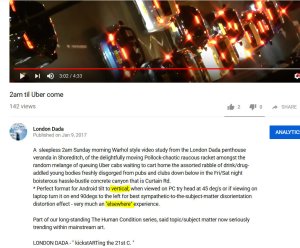 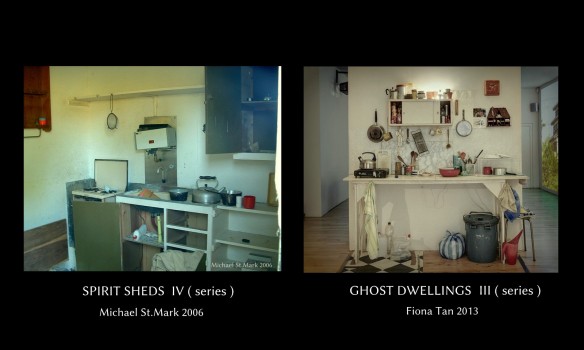 ..Dada was and is first and foremost a war-protest movement

Lest we forget we had a devious war criminal as a prime minister, sending 179 of our brave lads to early graves on the back of a gigantic deception; and who to this day remains free from prosecution. 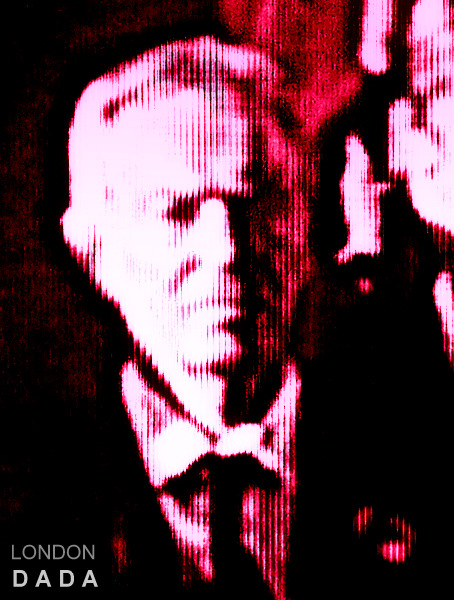 New Release for 2016; Digital screenshot from TV coverage. Image crop of pixelated Blair in the crowd of politicians present and past at the Cenotaph, Whitehall, 11.11.2012. Tonally altered and rendered in blood red.
Open edition of signed prints 12″ x 8″ on Kodak Pro Endura

The SEVEN TENETS OF DADA 100 years on 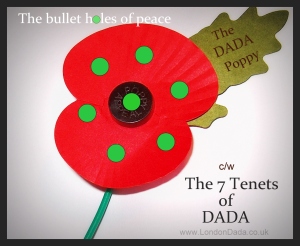 100 years since Armistice Day, November 1918. High Time for an amended poppy design- one that not only remembers the fallen in all wars, but also demands from politicians no more unjustified conflicts in which our brave men are sent to die for little more than big business interests tarted-up as worthy causes by the despicable mainstream media in train with bent politicians.

London Dada Work from 2014, re-posted at 7.30am on July 1st 2016, 100 years to the minute when 20,000 British troops were sent to pointless deaths on the Somme on the back of the deceit of politicians and bumbling incompetence of the military generals.

Echoing and reminding also of the obscene debacle that was the illegal Iraq war and forthcoming Chilcot inquiry report on the bare-faced lies told by this country’s then prime minister as justification to go to war with a country not threatening this one in the slightest. 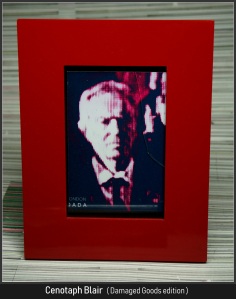 ” I feel now, as I felt then; that the politicians who took us to war should have been given guns and told to settle it themselves instead of instigating what is nothing less than legalized mass murder ” – Harry Patch, last surviving WW1 soldier

” The war is based on a glaring mistake – men have been confused with machines” – Hugo Ball, father of Dada, 1916

Bent double, like old beggars under sacks,
Knock-kneed, coughing like hags, we cursed through sludge,
Till on the haunting flares we turned our backs
And towards our distant rest began to trudge.
Men marched asleep. Many had lost their boots
But limped on, blood-shod. All went lame; all blind;
Drunk with fatigue; deaf even to the hoots
Of tired, outstripped Five-Nines that dropped behind.

Gas! GAS! Quick, boys! – An ecstasy of fumbling,
Fitting the clumsy helmets just in time;
But someone still was yelling out and stumbling
And flound’ring like a man in fire or lime …
Dim, through the misty panes and thick green light,
As under I green sea, I saw him drowning.

In all my dreams, before my helpless sight,
He plunges at me, guttering, choking, drowning.

If in some smothering dreams you too could pace
Behind the wagon that we flung him in,
And watch the white eyes writhing in his face,
His hanging face, like a devil’s sick of sin;
If you could hear, at every jolt, the blood
Come gargling from the froth-corrupted lungs,
Obscene as cancer, bitter as the cud
Of vile, incurable sores on innocent tongues, —
My friend, you would not tell with such high zest
To children ardent for some desperate glory,
The old lie: Dulce et decorum est Pro patria mori.
( ” It is sweet and honourable to die for one’s country ” )

” For us ( Dadaists ), art is not an end in itself, but rather an opportunity for true perception and criticism of the times we live in ” – Hugo Ball, Zurich 1916

Re-engaging art with vitally important everyday issues in society is finally gaining traction – even trending – within the art establishment itself, for the first time since the brave anti-fascist expressions of early 1930s Berlin Dadaists such as John Heartfield.

London Dada – reconnecting art with the times we live in. Since 2005
( see About Us link, top page )