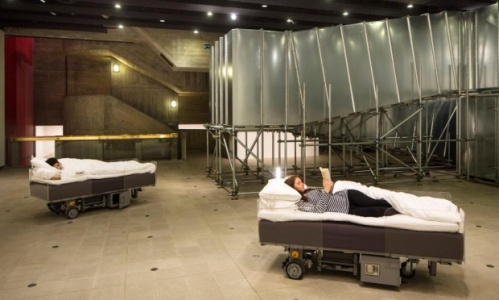 “The customary “look but don’t touch etiquette for art exhibitions is about to be torn up at the Carsten Höller show in London, where members of the public will be invited to spend a comfortable if discombobulating night stretched out in one of the works  a bed which will pass the hours of darkness trundling slowly around the exciting Hayward Gallery.

The price, at £300 for two beds, is comparable to an expensive London hotel, but even the most luxurious accommodation rarely includes slides which are more than 15 metres high, flying machines, or spectacles which turn the world upside down.

German artist Höller, who originally trained as an agricultural scientist, is renowned for turning art galleries into playgrounds full of adults and children, making them shriek with glee and occasionally terror. Visitors and their children queued for hours in 2007 to go on his giant slides which shot them from the top level to the ground floor of Tate Modern’s enormous Turbine Hall.

In his latest exhibition, Carsten Holler: Decision, the artist says his Two Roaming Beds (Grey) introduce “a moment of uncertainty, where the sleepers can’t be sure the place where they close their eyes will be the same place they wake up.”
– The Guardian 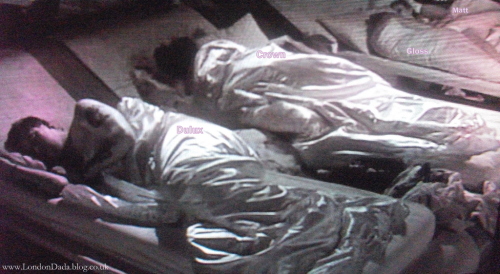 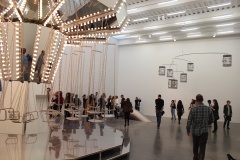 Carsten Holler ( not a Belgian lager ), his mirror carousel… and yet another playground slide ( as planned for 2015 ) on the side of the Hayward gallery where visitors can exit the building in dizzying haste. 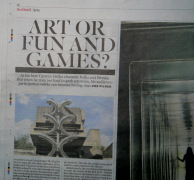 Independent arts reviewer Zoe Pilger’s attempt at keeping her career on track despite by the looks of it disliking most of Holler’s Hayward. pieces. The mainstream media art agenda – pushing full page review spreads on identikit sterile tedium while stone-walling anything remotely new, challenging or truly authentic, out of fear of upsetting those in power and losing out on new job opportunities or even a royal gong 30 years hence.

2 thoughts on “Carsten Holler’s Travelling Beds – the art of entertainment.”