Seeing in the New Year with a message of slight but significant hope in the art world.
Signed edition prints info tf.

Turner Prize 2016 Dada protest happening work comprising a single green laser light projected across the River Thames onto the E. facing top stone gable facade of Tate Britain, Millbank, London on the evening of the 5th December 2016 as the Turner Prize presentation award was being held within.

Context and purport.
In tandem with TP nominee Michael Dean’s inspirational Work of critical social commentary and connectivity whereby the artist has taken away one penny from a pile that amounted to the sum of money an average UK family needs to subsist on for one year, according to Govt. statistics – thus rendering the total amount left below the official poverty line.

A rare if not unique example of an artwork that attempts to highlight politically unpalatable truths about the difficult and harsh conditions many people are facing in the UK today, finding its way at least into the media half spotlight.
Needless to say, the pompous self-serving institutionalized judges backed away from awarding the prize to the admirably-principled Dean, plumping instead for the safe ( politically, for them ) polished vanilla and tepid neo-Merz creations of Helen Marten.

AF; representing a time-honoured ageist as well as elitist glass-ceilinged institution.
One green bottler TP judge chair sitting on the fence… knows which side his career bread’s buttered on. Of course guarding well against accidental falls into career-limiting approval of art showing any degree of perceptive criticism of the hard times we live in, plays a large part in how these one-dimensional jobsworths rise to eventually be anointed directors of art institutions. 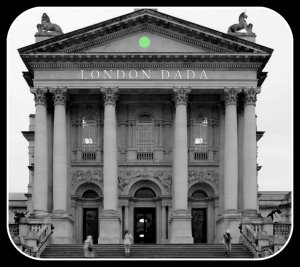 London DADA; the missing link in European Dada; Kick stARTing the 21st.C.
” Reconnecting art with true perception and criticism of the times we live in ”