While environmentalists and climate change scientists blow a gasket over the Amazonian rainforest clearances, here in the UK and in green-championing SNP Scotland in particular, thousands of acres of deforested hillsides pave the way for forests of electricity consumer-subsidised turbines. Hundreds of square miles of CO2-reducing trees felled & removed, replaced with debatable CO2-reducing renewables.

Even when all wind farms are producing electricity at full capacity, the coal & gas-fuelled power stations’ furnaces that create the steam pressure that drives the conventional electricity-producing turbines must still be kept burning as backup in readiness to kick in those turbines to ensure the absolutely essential consistent and smooth supply to the grid.
In the face of intermittent and unreliable electricity feed from renewable sources combined with unpredictable surges in public demand, it’s not possible to reduce conventional supply CO2 emissions without going nuclear or there being a breakthrough in electricity storage technology .. without running the risk of regular power cuts ( but try telling that to the SNP )

Links to first in the series; Sea Forest / Land Deforest

News breaks the day following the above post, that Britain had its first ever coal-free day in terms of the fossil fuel’s contribution to providing electricity to the national grid.
The report mentions that the source of most of the electricity that allowed this to happen is coming from increase in use of natural gas ( also CO2 intensive ) and new so-called renewable bio mass fuels, that largely comprise wood pellets and chippings sourced from waste offcuts and sawdust residues after the felling and milling of trees from forested areas such as these in Scotland.
Far from being CO2 neutral, this new “clean renewable” source is actually found to increase CO2 emissions… in levels greater than burning coal ever did. The stench of corruption is palpable.
You couldn’t make it up, as they say 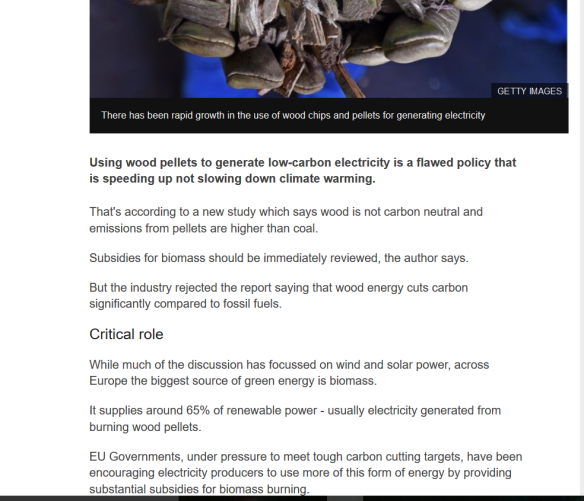 A Quiet Day on the Farm