Part of the ” Everything’s One under the Sun” LD series
Another example of the fascinating role that chance plays in Dada, in fact a random choice was behind the very discovery of the word in 1916

.. and the very reason that spontaneous chance encounter urban /street / nature photography is the eminently suitable format to represent Dada’s contemporary 21st C. expression, in the hands of the keen-eyed artist of moral integrity, sensitivity and perception.

” The Dadaist is convinced of the overall connection between all things and beings” – Hugo Ball, father of Dada

*NEW Damien Hirst scandal – the more new material he presents & attempts to pass off as his own creation, the more obvious becomes, in its stead, a crude parroting of other artists’ work and a depressing paucity of personal creative talent, not to mention loose moral compass in terms of apparently not feeling even mildly responsible or aware of the lifelong psychological damage inflicted on many of his often highly gifted and sensitive artist victims, to whom he offers not a shred of acknowledgement, rather, instead, dismissive put-downs laced with obscenities.

Damien Hirst’s hook line & sinker plagiarism of London Dada artist Dingo’s 2008 unique conceptual Work “Loggius Fishious Extraordinarious“ – is no less than the blatant and cynical theft of both title and the very concept that forms the essential basis upon which every exhibit in his Venice show critically depends and for which Damien Hirst, the shameless brazen fraud and hypocrite, has the sheer nerve to accept plaudits and praise. 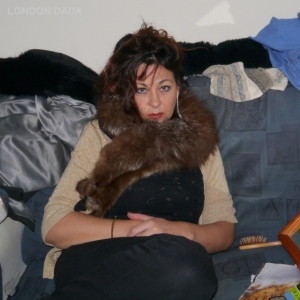 Dingo; not amused.
What’s in the look is a gift to U, Hirst – have a shot at what it might be