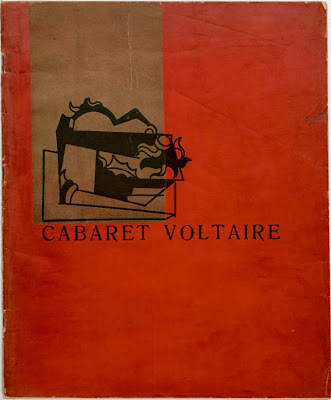 100 years ago today the visionary German writer, poet and musician Hugo Ball stepped onto the stage in a little bar in a side street in Zurich and, along with his wife, the artist and singer Emmy Hennings and a small group of previously unknown artists, initiated his literature, dance and music war-protest project Cabaret Voltaire, that was shortly thereafter re-named Club Dada; marking the beginning of the ultra radical art/anti art movement that was to shake the art world to its foundations and profoundly influence multifarious new artistic directions and expressions later in the 20th century. 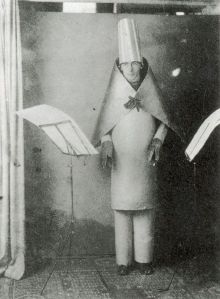 Ball’s reasoning behind the Sound Poem

Language was deeply discredited due to its use as propaganda that “justified” war. The journalistic and political abuses of language meant that, according to Ball,

When I founded the Cabaret Voltaire, I was of the opinion that there ought to be a few young people in Switzerland who not only laid stress, as I did, on enjoying their independence, but also wished to proclaim it. I went to Mr. Ephraim, the owner of the “Meierei” restaurant and said, ‘Please, Mr. Ephraim, let me have your hall. I want to make a cabaret.’ Mr. Ephraim agreed. So I went to some friends of mine and asked them, ‘Please, let me have a picture, a drawing, an engraving. I want to have an exhibition to go with my cabaret.’ And I went to the friendly press of Zürich and said, ‘Write a few notes. It shall be an international cabaret. We want to do some beautiful things.’ And they gave me pictures, and they wrote the notes.

So, on February 5th, we had our cabaret. Mrs. Hennings and Mrs. Leconte sang French and Danish songs. Mr. Tristan Tzara recited Roumanian verses. A balalaika band played some charming Russian folk-songs and dances. Much support and sympathy came to me from Mr. Slodki, who designed the poster for the Cabaret; and from Mr. Hans Arp, who placed at my disposal a few works by Picasso, in addition to his own works, and who also got me some pictures from his friends: O. van Rees and Arthur Segal. There was also much assistance from Messrs. Tristan Tzara, Marcel Janco, and Max Oppenheimer, who willingly experssed their readiness to appear at the cabaret.

We organized a Russian soirée, and soon after a French one as well (with works by Apollinaire, Max Jacob, André Salmon, A. Jarry, Laforgue, and Rimbaud). On February 26th, Richard Huelsenbeck came from Berlin, and on March 30th we performed fabulous Negro music (always with the big drum, boom, boom, boom-drabatja mo gere drabatja mo boonooo…). Mr. Laban was present at the performance and was quite enthusiastic. Thanks to the initiative of Mr. Tristan Tzara, who along with Huelsenbeck and Janco, performed for the first time in Zürich and, indeed, in the whole world, simultaneous verses by Messrs. Henri Barzun and Fernand Divoire, as well as a simultaneous poem of their own composition.

For the little pamphlet we are publishing today, we have to thank our own initiative and the assistance of our friends in France, Italy, and Russia. It is to exemplify the activities and the interests of the cabaret, whose whole endeavour is directed at reminding the world, across the war and various fatherlands, of those few independent spirits that live for other ideals. The next aim of the artists united here is to publish an international periodical. This will appear at Zürich and will be called ‘DADA Dada Dada Dada Dada.’
– Hugo Ball, Zürich, 15 May 1916

Ball’s close friend and co-founder of Dada, Richard Huelsenbeck  writes in his book ” Memoirs of a Dada Drummer ” ( click to expand the images for legibility ),  an evokative first-hand account and intimate flavor of what were, for that time, fairly incredible happenings during Cabaret Voltaire soirees

” Dada is essentially the search for a new morality” – Richard Huelsenbeck

” For the Dadaist, art is not an end in itself, but it is an opportunity for true perception and criticism of the times he lives in ” – Hugo Ball