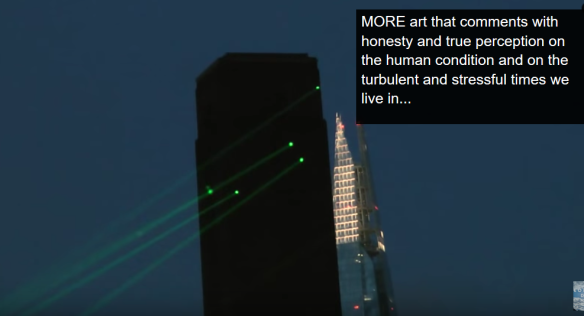 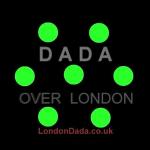 Marking the inauguration of the new Tate Modern extension, the Switch House, on 17th June 2016, London Dada’s direct art action activist Art Axis activates a 2hr two-part 6 point green laser moving light show projected on the brickwork of Tate Modern’s ( Bankside power station)  dark and sinister 325ft ( c. 100m ) chimney stack – that was visible to millions of people over the whole of London – whilst not allowing the beams to be directed anywhere near people or into the sky, thereby remaining within the bounds of legality.
Image II plus video to follow…

This Dada protest Work highlighting the acute need for change not only within art, but also in what is a still highly class-divided UK society and towards giving equal and fair opportunities to all, regardless of social background. The EU referendum gives all artists and creative thinkers a new opportunity to contribute towards a new nation, built on important values and for the benefit of all its people, not just a narrow London elite.

Signed edition of 10 fine art prints derived from selected  frame-grabs from the video to be shortly available of this seminal Dada light Work, July/ August 2016

THE TENETS OF DADA

Here’s perhaps the cue needed for Tate Mod’s new director to get creative with a little night light show of her own up & running onto her gallery’s dark and dour stack. ( Jeez, why didn’t we think of that ) -. MSM 24 / 6/ 2016

* UPDATE
The Guardian, July 8th 2017
Maria Balshaw breaks cover on Tate Modern’s new art stance, never mentioned once during her predecessor Sir Nicholas Serota’s long stint as director,  vindicating  and validating London Dada’s long campaign for art that connects with life and the times in which we live. 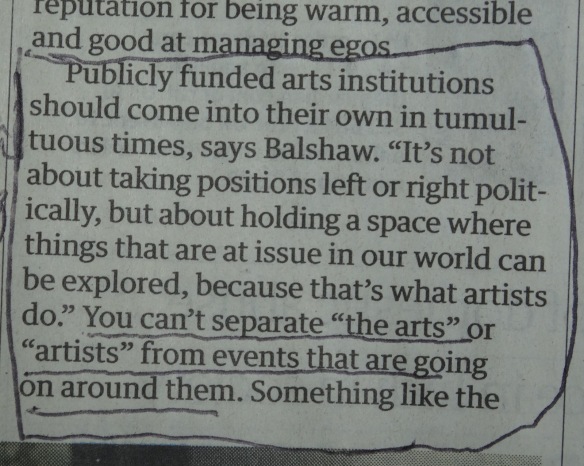 ” You can’t separate the arts or artists from events that are going on around them”
– not only exactly what the major UK arts institutions and museums have been doing since their inceptions, but also excluding or ignoring artists whose work attempts to do just that regarding issues of real concern here in the UK. Embracing Chinese dissident artists and the like is far too easy a cop-out.

Will Balshaw de-politicise art and allow a truly free range of expression? Unfortunately probably not, she didn’t get to where she is by upsetting the elitist UK art establishment status quo.
Yet at least in paying lip service to that ideal there belies a grudging recognition that real progress along those lines is inevitable…
– M. St.M