London Dada’s objective in bringing graffiti artist Banksy’s true appearance and identity to public attention lies in our belief that the art world would be a much healthier and just environment for all artists to operate successfully if the honest and plain-speaking force for good that Banksy can be, abandoned his now tedious verging on cowardly anonymity, screwed-up his courage and stepped out of the shadows to explain in plain terms his wall messages to the main media via interviews and public appearances.
– Michael St.Mark
London, February 2019 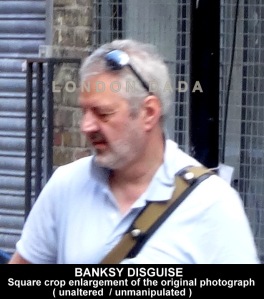 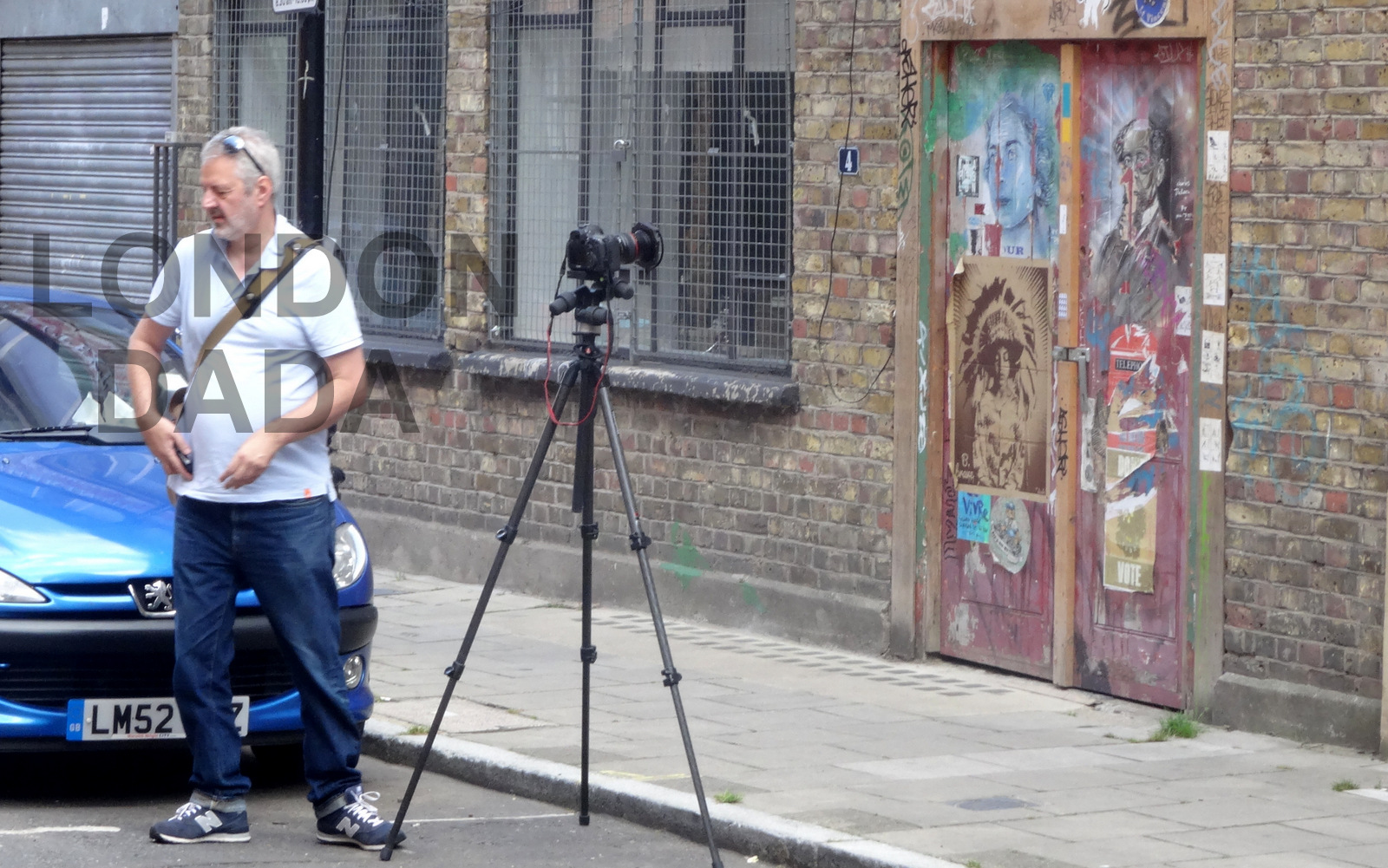 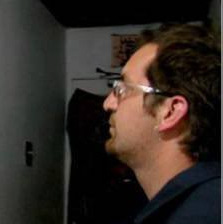 Banksy in Jamaica minus his prosthetic sharp-end nose piece .. 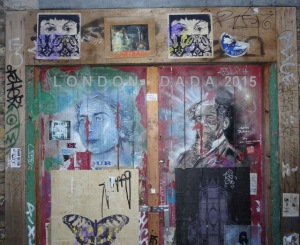 **
And to think; we all so wanted to believe Banksy is as originally creative and witty as he is a talented draughtsman. **sigh emoji** 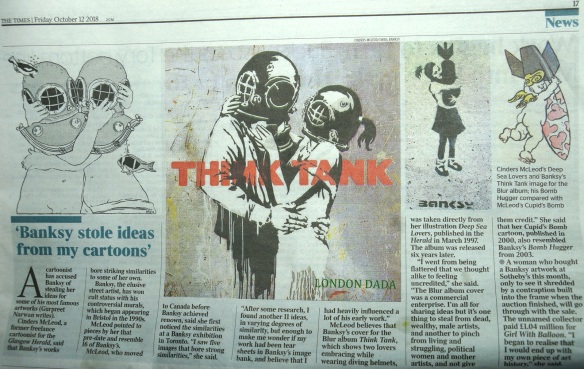 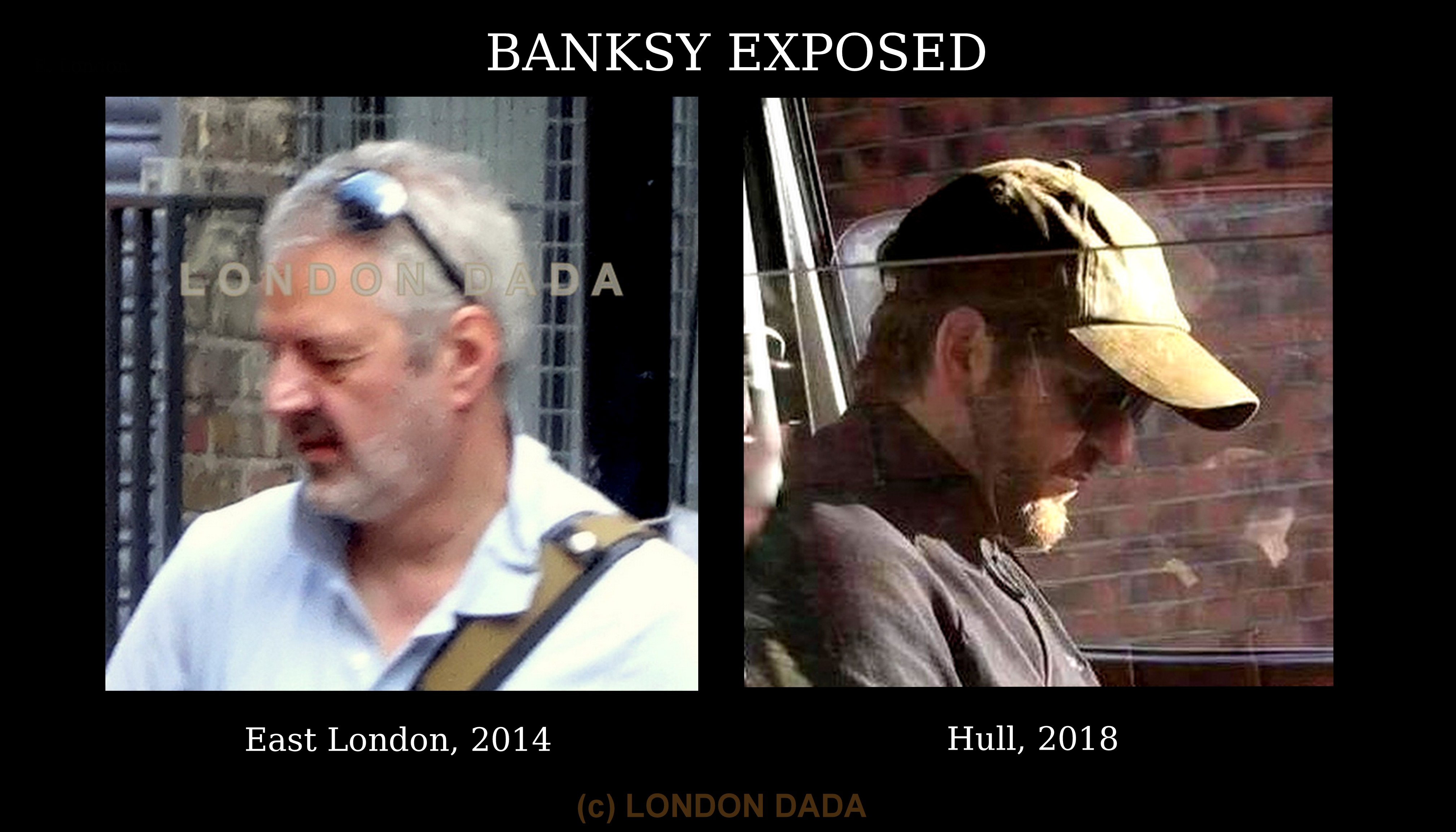 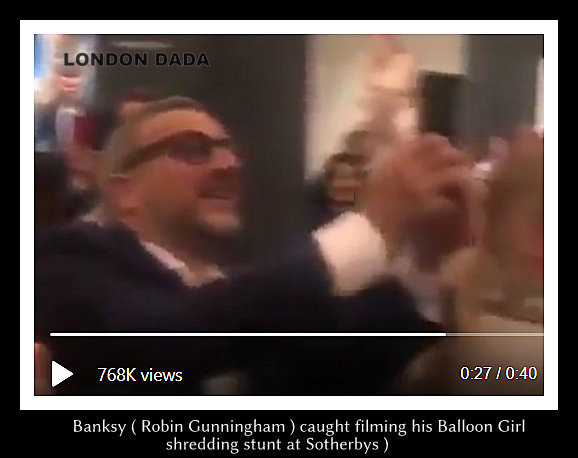 Update 12/12/2018 ( still frame from Banksy’s ” Director’s cut and a Half ” video )
After further close analysis and cross-compares, we can say with 100% certainty that this individual, previously filmed elsewhere in the Sotheby’s auction room, is Banksy himself; inadvertently, irony of ironies, caught in close-up on his own video. 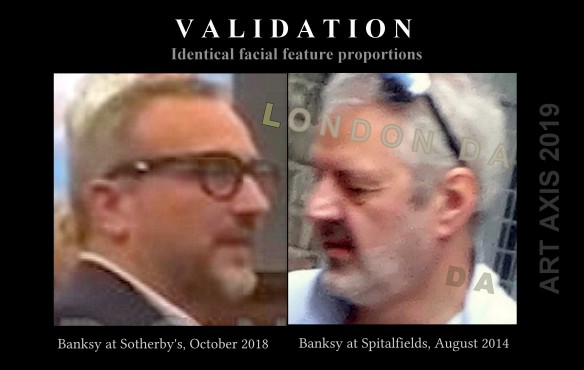 Banksy in Lockdown ( a slight aside )

This image, put out by Banksy in the midst of the UK coronavirus lockdown in 2020, features a play on French graffiti artist Blek le Rat’s time-honoured rat motif and purports to be based on Banksy’s actual home bathroom; perhaps offers an interesting insight into his social-domestic situation.
The fixtures, fittings and colour scheme are decidedly dated, as if belonging to an unmodernized property from the 1970s or 80s era, which in turn suggests he lives alone, in that if he was married or co-habiting, the lady of the house would typically almost certainly insist on a new suite, especially considering the wealth of her husband or partner
In summary, Robin Gunningham probably lives a predominantly sheltered, if not hermit-like existence, most likely in or around the Bristol area as evidenced by his latest street work on Vale St in the Totterdown district, that if he’s conforming to lockdown rules is probably not far from his house.
Incidentally, the current mask mandates in force would constitute an absolute boon for Banksy – meaning he now doesn’t need to bother with tiresome faffing around with variations of disguise before sallying forth to the shops or further afield “for work”.
We can therefore expect more frequency of activity from an emboldened RG as lockdown is eased this year, but he must of course guard against hubris.

Provisional social comment on Rob’s recent “spraycation” assortment of vanilla artworks appearing on sundry east coast seaside resort infrastructure; August 2021.
What springs to mind off the bat is a revamped version of two lyric lines from The Who’s old hit ,The Seeker..

” People tend to hate me ’cause I’m faceless & rip-off Blek le Rat
..but if I ransacked their homes they’d wanna shake my hand “

“Suffolk Police said in a statement: “Police are appealing for witnesses to an incident of criminal damage in Lowestoft.

Interesting isn’t it, that defacing a Banksy spray painting on a wall is now considered a criminal offence?

“It took place at some point between 5:35pm on Saturday 14 and Sunday 15 August at just after midnight “
Just because Frank Newsome, the Merrivale Village owner endorsed – nay embraced – the model stable plant complete with urban style text vandalism only after he realised it was daubed by Banksy and would thereby be a means to make mega money as a five-star tourist attraction or to sell, is in no way justification or carte blanche for the artist to go about his business spraying any object or objects with impunity and effectively litter them in public locations without legal consequences, as there definitely would be for other artists not in the same public fame bracket, simply because the graffiti concerned subsequently appears on Robin Gunningham’s website as an “authentic Banksy”.
It’s as if this Blek le Rat copyist has become above the law in the UK.

btw liking the deliberate comment syntax spaghetti-like most blokes, he comes in many different disguises