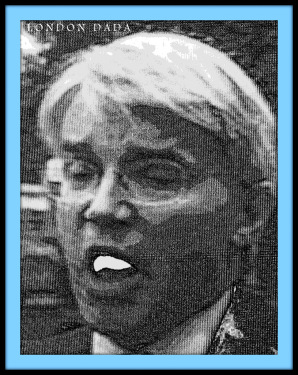 Today, 2 years on, found by a High Court libel judge to have “on the balance of probability” used the words to which he was attributed.
So from the hubris of libel to liable .. for £millions in costs and damages, when a simple honest apology to the cop
concerned would probably have caused the whole episode to blow over in a week. Deary me, these tiresome “get off my land” attituded Oxbridge fascists.

In any case it would appear to end up the same

Steel shutters are electrically-operated by a decisive human hand

..but could a talking book ever replace our love? ”

” From certain angles he looks like a goddam werewolf ” ( recorded verbatim.. so probably not. )

The Price of Enlightenment – demolition of the house of ego. / The Human Condition VI
c. Michael St.Mark 2014

“ There is naught save Allah within these robes ” – Kabir

Comment on the human dilemma  and latest in our The Human Condition series, now trending as a distinct genre within UK mainstream art.
Alternative title; What’s the point ?( of Windows ), suggested by poet and writer Ian Thorp