Will he be giving any of his £25,000 Turner prize to a war charity of Brian Haw’s choice?
Will he use it in any way in appreciation of the source who “inspired” him?

What do you think.

” I’d like to express gratitude to Mark Wallinger for providing us with this wondrous art. Congratulations on your much deserved Turner Prize. I shall certainly be following Mark’s art in future. The bear wandering round a room for ten days is genius. How did you create such a masterpiece? I could probably study art all my life not be able to come up with such a stunning example of art like this. I’m sure some un-enlightend people just see a twat in a bear suit, but those people I say this: Look closely, take your time to feel the art. And maybe you’ll not just see a twat in a bear suit, but a big beautifully artistic, prize-winning twat in a bear suit.” – a public comment. 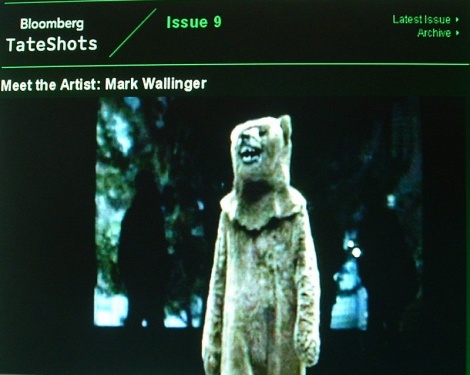 Undoubtedly more comely in the outfit…

Below.  A perfect example of the art establishment playing politics through its yes men – a neutered and sanitized version of the reality of Brian Haw’s long-suffering attempt to highlight Blair’s and Westminster Labour MPs’ war crimes against humanity.

You may have noticed, if you saw this excuse for an art exhibition at Tate Liverpool, that Haw’s
emotive language against Tony Blair ( PM at the time),  and prominent on his original protest wall,
was all but removed .
.
.

THE REAL ARTIST ( Below)

A simple man with love and courage in his heart.
That’s real art.